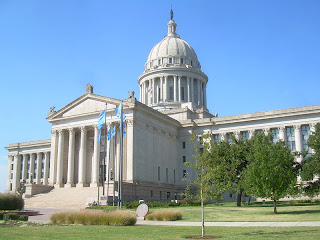 “Oklahomans have spoken loud and clear this year by voting in the largest Republican majority in Oklahoma history,” said House Speaker-elect T.W. Shannon, R-Lawton. “They want overreaching regulations that limit their freedom repealed. They want policies enacted that protect their rights, that encourage job growth and prosperity and that improves our education system so their children can have a brighter future.”

On infrastructure, Speaker Shannon proposed an eight-year, pay-as-you-go plan to directly fund the upkeep and repair of infrastructure.

“In the past, the model has been to neglect infrastructure to the point of decay and then to take out bonds to repair those needs,” said Shannon. “Our plan will be similar to the eight-year transportation plan we introduced last year that allows us to prioritize projects based on need and to pay our way as we go without adding more debt onto the backs of hardworking Oklahomans.

Regarding the state budget, State Rep. Scott Martin addressed the budget discussions that will be taking place during the upcoming session and indicated that a tax-reduction proposal would be included.

Rep. Martin noted that he has introduced a measure that would reduce the tax rate by .25 percent this session.

“We need a budget that covers our core services and is responsible with our taxpayers’ money,” said state Rep. Scott Martin, R-Norman and chair of the House Appropriations and Budget Committee. “We are going to continue the efforts of the past few years to craft a fiscally conservative budget that takes into account the daily needs and burdens of our citizens and businesses. We need to reduce the tax burden on families and businesses so they can have more money at the end of the month to put food on the table and gas in the tank.

“We also need to pay attention to what is happening at the federal level, where their inaction on fiscal issues will impact our state spending. Unlike the federal government we will pass a balanced budget on time.”

The caucus also stressed the importance of making additional reforms to the state’s expensive workers’ compensation system and the debt-burdened public pension system.

“In particular we want to make sure that injured workers are properly taken care of and even retrained if need be so they can get back on the job as quickly as possible. We want to create an environment where existing businesses can grow and add jobs and also look at ways to encourage new employers to relocate to Oklahoma.”

“We will offer a pension plan that will be competitive with the private sector and that will give more investment mobility to state workers,” said state Rep. Randy McDaniel, R-Oklahoma City and chair of the House Pension Oversight Committee. “We believe in giving workers more opportunity and choices for greater economic prosperity.”

“We believe it’s important to restore as much local control on education issues back to the local communities,” said state Rep. Lee Denney, R-Cushing and chair of House Common Education Committee. “We want to look at ways to increase accountably for our schools, our teachers and our administrators so we can focus on providing a quality education for our children.

“We also want to find a way to fund past reforms that our schools simply cannot afford to implement and to push back against one-size-fits-all federal mandates that restrict our ability to make improvements to our education system.”

The House Republican Caucus agenda in its entirety is as follows:

Economic Opportunity for All

House Republicans also released their guiding principle for the 2013 legislative session, as follows:

The Oklahoma House Republican Caucus is committed to valuing human life at all stages, free enterprise, personal responsibility and the rule of law by developing responsible solutions that rein in government and promote economic opportunity, individual prosperity and a civilized society.

Posted by Rep. Josh Cockroft at 1:38 PM No comments:


OKLAHOMA CITY – In light of a New York ban on assault rifles, state Rep. Dan Kirby said today he would like to invite Remington to consider Oklahoma as a gun manufacturing location.

“I was just reading about the backlash from an Ilion, N.Y., Remington gun factory and I wanted to get the word out that many Oklahoma lawmakers would welcome gun manufacturing jobs in our state and would like an opportunity to talk to Remington about our incentive programs and friendly business climate.”

Kirby said Oklahoma has a deeply embedded gun culture and will unlikely ever consider any type of ban on guns.

“Support for Second Amendment rights is bipartisan and overwhelming,” said Kirby. “Really, I think most Oklahomans would be proud to welcome gun manufacturers to the state.”

Kirby noted that Oklahoma has several manufacturing incentives available to companies that bring jobs to the state such as the Oklahoma Quality Jobs Act and a 5-year property tax exemption for manufacturers. State lawmakers have enacted lawsuit reform in past year and are working this year to reform the state workers’ compensation system.

“You can’t get much more business-friendly,” said Kirby.
Posted by Rep. Josh Cockroft at 1:01 PM 11 comments:

Lawmakers have filed their bills for the 2013 legislative session. I have decided to push for school board election reform, open record request accessibility, voter ID and bills supporting our Second Amendment rights. Below is a description of each of my bills.

My legislation, House Bill 1887, would change all school board election dates to correspond to a regular November election cycle in odd-numbered years. It would also make school board member terms four years. The intent is to increase voter participation, accountability and input into school board elections. I also filed House Bill 1891, which  would require voters to prove their citizenship and the verification of signatures for individuals requesting an absentee ballot.

House Bill 1889 would change current ethic rules to allow a county party to contribute to a candidate or candidate committee independently. Currently, state and county parties act as one entity when it comes to campaign contributions.

House Bill 1895 would reduce appropriations to the Oklahoma Arts Council. This saves the state $4 million annually, which can be redirected to core services. It will also ensure the state is not competing with the private sector in the art industry.

I filed the following bills at the request of constituents and other organizations:

House Bill 1890 would modify the sex offender “zone of safety” by increasing the age of children they must avoid and prohibit them from entering a state park. I filed this legislation at the request of the Pottawatomie County sheriff’s department and the Oklahoma Department of Tourism and Recreation.

House Bill 1892 is a constituent request bill that will allow employees to object to receiving a vaccination against influenza.

House Bill 1893 would modify the manner in which handguns may be transported on certain public properties. This bill was requested by the Oklahoma Second Amendment Association, which includes members of my district. The organization also requested House Bill 1894, which allows firearm training and qualification course providers to determine the course fee and allows for immunity against civil liability in certain instances. House Bill 2012 makes firearms, ammunition and other items exempt from federal law and regulation when it is made and sold within the borders of Oklahoma.

Beginning in 2014, House Bill 1896 requires high students to earn a career and technology education credential to graduate. This is a workforce development bill requested by the Career Tech Association. The organization also requested House Bill 1898, which allows the Oklahoma Higher Learning Access Program to include certain career technology courses.

House Bill 1897 was requested by Pottawatomie County Commissioner Eddie Stackhouse. It designates the Sergeant Bret Daniel Isenhower Memorial Highway on a portion of Highway 59 in honor of his sacrifice.

My constituents are frustrated with the current system for electing county officials. If two Republican candidates run for a county office and no Democrat files, than no Democrat can vote in the election. Making county offices non-partisan will allow everyone to vote, regardless of who files for what is really not a partisan office. I have filed House Bill 1899 and House Bill 1900 with the intent of making county races non-partisan. HB1899 has the support of the Oklahoma Sheriff’s Association and would specifically target county sheriff races.

I will continue to keep you informed of the developments at the Capitol as the legislative session convenes.

Once again, I am here for the people of my district. I am in a position of service and want to help in any way that I can. Please never hesitate to contact me at (405) 788-9160 or Josh.Cockroft@okhouse.gov. Follow me on Twitter: @VoteCockroft27 and on Facebook: Representative Josh Cockroft. 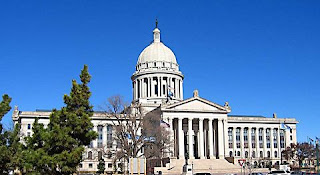 The legislation would assert the Second Amendment rights of Oklahomans by exempting guns or ammunition made in the state from federal regulations. The bill specifies that to qualify for the exemption the guns must be clearly marked as “Made in Oklahoma” and kept within state boundaries.

“I am concerned about the talk coming out of Washington, D.C., about tougher gun control,” said Cockroft, R-Tecumseh. “This bill is meant to address potential federal gun control actions and regulations by limiting federal regulation within Oklahoma borders. I believe the bill has been written in a way that is constitutional and will address potential federal action.”

Today was the final day to file legislation for the 2013 legislative session, which convenes Feb. 4.
Posted by Rep. Josh Cockroft at 2:28 PM 3 comments:

OKLAHOMA CITY – State Rep. Josh Cockroft announced today he will file two pieces of legislation that would make county elections non-partisan in Oklahoma.
The first bill will focuse solely on sheriff elections. The second bill would make all county elections non-partisan.
“Making these non-legislative positions non-partisan is an important step to simply putting the right people in the right office, no matter their party,” said Cockroft, R-Tecumseh. “Constituents are always telling me about the frustration they have with the current system, where they can’t always vote for the candidate they want because of his or her party designation. While I believe legislative positions should be partisan, I don’t think most of us see a need for partisan county elections.”
The Oklahoma Sheriff’s Association have voted unanimously for the first time to support legislation to make sheriff elections non-partisan, Cockroft said. Non-partisan elections would allow all voters to participate, even if candidates that file belong to only one party.
“Individuals will still be able to run for office pointing to the ideals of the party they belong to, but the duties that they perform don’t require an R or a D behind their name, and the ballot box won’t either,” Cockroft said.
Lawmakers are currently in the process of drafting legislation, which must be filed by Jan. 17, 2013. The legislative session convenes Feb. 4, 2013, with the governor’s State of the State address.
Posted by Rep. Josh Cockroft at 10:35 AM 1 comment: