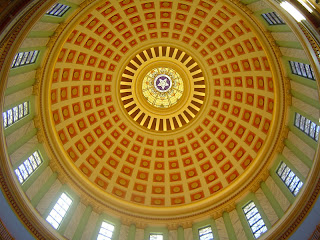 OKLAHOMA CITY – Oklahoma’s next regularly scheduled legislative session isn't for another six months, but some state lawmakers are already making it clear that modifying or repealing Common Core will be a high priority when they meet in February.

Oklahoma schools have been gradually implementing the new math and English learning standards for the past three years, and expect them to take full effect beginning with the 2014-15 school year, reports Oklahoma Watch.
But several influential Oklahoma legislators believe there’s still time to stop Common Core from taking root in the Sooner State.
Republican state Rep. Gus Blackwell, who chairs two House committees that are examining Common Core’s impact on the state’s public schools, told Oklahoma Watch he plans to offer legislation that will modify the nationalized learning standards, based on what the committees find.
“Oklahoma educators, Oklahoma legislators, we will make these decisions,” Blackwell said.
State Rep. Jason Nelson, also a Republican, said he “definitely” plans to offer legislation that repeals Common Core outright.
“Let’s set even higher standards to where you don’t need Common Core,” Nelson told the news site.
While all these legislative remedies will have to wait until Feb. 3, 2014 before being considered, Oklahoma’s state education officials are visiting school districts to help them prepare for the switch to Common Core.
It’s unclear if opponents have enough support in the legislature to force a repeal of Common Core and to overcome a likely veto from Gov. Mary Fallin, who’s outspoken in her support of the new learning guidelines.
But Common Core opponents celebrated a significant victory last month when State Superintendent Janet Barresi announced Oklahoma was dropping out of a Common Core-testing consortium over concerns about the cost of the tests, the amount of time they’d take to administer, and the lack of technological readiness in schools throughout the state.
“Barresi said the state will work with a company to develop its own new (Common Core-aligned) standardized tests for 2014-15,” reports Oklahoma Watch.
Posted by Rep. Josh Cockroft at 12:31 PM 1 comment:

Ceremony Tomorrow for Opening of Rail Line Closed for Decades

A ribbon cutting ceremony at 11:30 a.m. tomorrow will celebrate the reopening of a rail bridge across the North Canadian River in Shawnee. This is the first step in revitalizing an Oklahoma rail line between Shawnee and McAlester that has been closed for over two decades.

Wilburton company Arkansas-Oklahoma Railroad, which leases the line from Union Pacific, put millions of dollars into the washed-out bridge to reopen the dormant line. The ceremony will be held at the bridge just south of downtown Shawnee on the North Canadian River. Members of the press should arrive at the Shawnee Economic Development Foundation at 11 a.m. to caravan and carpool to the site.

“This will open up a vast economic development opportunity for one of the poorest parts of the state and allow businesses to open and thrive along the line,” said Cockroft (R-Tecumseh). “Communities like Shawnee and Tecumseh, as well as those in southern Pottawatomie County will once again have rail access.”

As rumors and new stories have been flying around about Governor Mary Fallin calling us into special session, I thought I would provide my perspective on why special session is being called and whether or not it is appropriate.

The whole discussion and idea of a special session this year stems from a recent Oklahoma Supreme Court decision on a 2009 lawsuit reform bill. Essentially, 2009 lawmakers were caught with their hands in the proverbial cookie jar trying to “log roll” many different topics into one piece of legislation – this happens all the time by the way. What this has resulted in is giving state leadership an avenue to get some extra issues pushed through that we weren’t able to address during our spring session. Many indications have pointed to adding tax reform, protecting Insure Oklahoma, and Oklahoma State Capitol building repairs to the list of issues looked at during a special session.

So where do I stand on the idea of a special session? I don’t like it, but I understand why there is a push to get this done. I side with the state leadership in believing that the Oklahoma Supreme Court decision was wrong. Not very many people are arguing that point. However, I am extremely skeptical that we will be able to fix the problem in such a short amount of time. An issue as large tort reform and health insurance coverage takes time to address, and as lawmakers have yet to see any language on either issue; time is running out. My greatest reservation is that each of these issues will be vetted, but not thoroughly. Fixing something just for fixing sake is a dangerous thing in the world of politics.

I support tax reform. I support protecting our Insure Oklahoma program. I support shoring up our lawsuit reform laws. However, we must assure that this is done correctly and not hastily.

Special session takes over $20,000 per day for lawmakers to return to 23rd and Lincoln. As of right now we have no clue on how long this will take. We must not waste the taxpayer’s time or money. We do enough of that in state government. 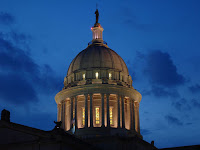 HB 1603 was designed to reduce the number of frivolous lawsuits and medical malpractice claims filed in Oklahoma, making the state more business friendly and protecting Oklahoma physicians from frivolous lawsuits. It was passed with bipartisan support and signed into law by Democratic Governor Brad Henry.

Earlier this year, the law was struck down by the Oklahoma Supreme Court for violating the Oklahoma Constitution’s “single-subject” rule, a prohibition on legislative logrolling. Fallin is calling on legislators to separate the law into different bills, thus reinstating the policy without violating the single subject rule.

“Oklahoma’s lawsuit reform measures are part of what makes this state attractive to businesses and allows us to retain and recruit doctors,” Fallin said. “Those laws are now under attack. In the weeks since the court ruled our laws unconstitutional, at least a dozen lawsuits have been reopened against hospitals, doctors and other employers. As lawmakers, we need to act now to protect our businesses and our medical community from frivolous lawsuits and skyrocketing legal costs.”

Fallin said the alternative to a special session could mean delaying a potential fix for a full year.

“If we do not act now, we may not see a legislative fix implemented until August or even November of next year,” Fallin said. “It is important to address this issue immediately and with a singular focus. The alternative is to allow Oklahoma’s business climate and job market to erode.”

Fallin pointed out that those interested in affordable health care should be particularly interested in passing lawsuit reform legislation immediately.

“Legal costs and predatory lawsuits are a driver of rising health care costs,” Fallin said. “If we allow the floodgates to be opened for a host of new medical malpractice suits, health care premiums will rise and health care will become less affordable. It’s important – for both the health of Oklahoma families and their economic bottom line – to act now and prevent lawsuits from pushing the costs of medical care even higher.”

With over half of our state budget being placed towards public education every year, it’s no surprise that the education system is always a hot topic at the Oklahoma State Capitol building. Of any issue that is dealt with in state government, education is by far the most divisive and controversial. The cause is from so many different views on how the system should be run. Oklahoma is very unique in the fact that we are the only state to have the requirement to fund education written into our constitution. Where the discussion begins however, is how to best allocate that funding.

The differing views on education within the legislature often reveal a rural representation/urban representation split. The needs, wants, and problems are completely different between rural and urban school districts. Those differences are very well represented in our elected officials.

We go back and forth on educational spending, curriculum, administration, mandates, and regulations. There have been many times where I have stepped back and challenged my colleagues to not get wrapped up in the numbers and details. We become so worried about education that we forget about the student. We talk about spending and mandates on school districts, all the while forgetting we are shaping someone’s future. It is a dangerous path to walk when our children become a number in an accounting book or a school report card.

It is for that reason that cannot agree with the one-size-fits-all model that is increasingly being pushed upon our educators, districts, and children. Talking with teachers and administrators within my district I know now more than ever it is happening in many different forms through unfunded mandates and even curriculum change. No mandate will ever increase the learning capacity of a child. However, a parent and a teacher can and will. Control needs to be given from as close to a student as possible, not from an office in Oklahoma City.

When we start asking what’s right for our students and not just the state’s pocketbook or its convenience; that’s when we will truly start to shape their futures. Yes, I am a rural legislator. Yes, I am a Republican. However, neither of those facts should or do change doing what is right for the children in our state. That is something we should all agree on.