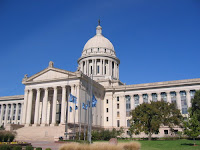 House Republicans are developing a comprehensive liability protection policy for Oklahomans who offer shelter to others during severe weather.

House Bill 2296, which would offer liability protection to mobile home park owners who allow residents to seek shelter in their offices during severe weather, was vetoed Friday by Gov. Mary Fallin, who cited concerns about possible unintended consequences.

“The House Republican Caucus cares about this issue and is moving forward with Governor Fallin to develop appropriate liability protection for those who open their doors to others during disasters,” said House Speaker Kris Steele, R-Shawnee. “The amended bill will address the governor’s concerns through a more comprehensive policy that meets and exceeds the intent of House Bill 2296. It will offer more protection to more people.”

Fallin plans to work with legislators to develop the comprehensive policy.

“After a thorough review of House Bill 2296, I felt that it had the potential to provide legal amnesty to individuals who encouraged the residents of mobile home parks to take shelter in structures that were unsafe. This would have the unfortunate and unintended consequence of actually putting lives in jeopardy rather than protecting them. This was obviously not the intent of the authors of this bill, which is why I vetoed the legislation,” Fallin said.

“Moving forward, I am absolutely committed to working with lawmakers on new legislation that accomplishes the intended goal of HB 2296, which is to encourage our citizens to open their businesses or homes to other citizens in times of crisis. Speaker Steele has already shared with my office an early draft of a ‘Good Samaritan’ law that not only achieves those goals, but broadens the scope of HB 2296 in a way that will positively affect even more Oklahomans,” Fallin said.

Fallin concluded: “Having just returned from Woodward, I have talked to families very recently whose ability to reach a storm shelter or sturdy building meant the difference between life and death. I will continue to do everything in my power to improve access to those safe places in times of emergency.”

On Monday, the House postponed action on an attempt to override the veto of HB 2296.

Steele extended an offer Monday evening to House Democrats to work together to develop a compromise, but Rep. Eric Proctor opted instead to try to override the veto again Tuesday. The veto override attempt failed.

“A good faith offer was made to House Democrats to work on a compromise bill with Governor Fallin and they rejected that offer to work together in favor of an all-or-nothing approach with the veto override,” Steele said. “I communicated to Representative Proctor that I wanted him to take a lead on this compromise, but he declined. It’s disappointing that some would rather play politics with this issue than work collectively on a compromise. Nonetheless, we are doing our jobs and moving forward with the governor to address this issue.”
Posted by Rep. Josh Cockroft at 12:37 PM