Cockroft Column - Regents Out of Touch With Priorities 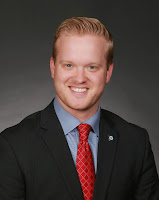 In the news this past week was the headline stating the Regents for Oklahoma High Education have requested an additional $98.7 million in state appropriations for the next fiscal year. While their claim is the additional money is for necessary increases, I wonder if their request shows a lack of recognition of the priorities of our state budget and Oklahoma’s conservative majority.

Chancellor Glen Johnson cited Gov. Mary Fallin’s Complete College America Initiative as a justification of the large request. The goal of that initiative is to increase the number of career credentials and college degrees earned by 1,700 each year for 12 years. In the first year of the initiative, the goal was surpassed with an increase of 2,945 additional career credentials and college degrees. In the second year, there were 3,577 additional credentials and degrees. Of the $98.7 million increase, $88.3 million would be used in support of the initiative. Johnson also notes that the increase would bring funding back to pre-recession levels.

The request makes it very clear that Johnson and the Regents of Higher Education do not understand conservative governing principles. Higher education received cuts or flat budgets in past years, because it was flush with funding. The success of the initiative so far shows that they are neither underfunded nor in crisis. If this request is to be honored it would place overall funding for higher education in Oklahoma over $1.086 Billion. Meanwhile, state prisons and K-12 schools, which both rank higher on my priority list, do not have adequate funding or flexibility in their spending. Higher education has long been the sacred cow of state government. Past state legislatures poured money into it with very few tough questions or analysis of the results of that funding. We can not continue to blindly fund such a large portion of our budget. We must continue looking at our state budget in the same way we as families look at our household budgets. Responsibly.

When we get to work in the coming year on the Fiscal Year 2016 budget, I will be among those encouraging lawmakers to focus on common education, career technology schools and other critical needs in Oklahoma. I am no enemy of higher education and I certainly see the positives that our higher education system produces, but I also believe in living within the means. When so many other areas of our state budget are short and stretched thin I think a massive increase to an agency that is flush with funding would be irresponsible and foolish.
Posted by Rep. Josh Cockroft at 12:47 PM